We are getting this error when trying to grade: Cannot open the PDF. The file may be corrupt, or in an unsupported format.

Our developer told us we needed to instal unoconv on the server. The IT company believe that they have now done that successfully but we're still getting this error.

Any tips for the developer/IT company on how to get it to work?

This error started appearing when we upgraded from 3.3.2 to 3.5.

Only occurring when word documents are uploaded and need to be converted to pdf.

I getting below error under the assignment grade module

I tested ghostscript but its return error like below 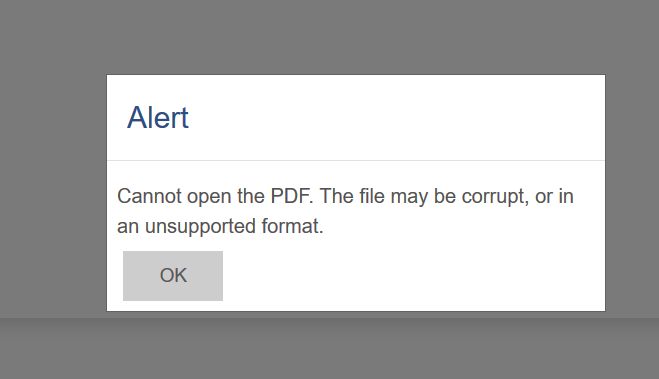 any one can help for how to resolve this error?

Average of ratings: -
Permalink Show parent Reply
If I run this script directly in SSH then it's working good

Yes I added Ghostscript in location

but when I test it it's getting an error.

converts a 'paged' png (graphic) to the tests.pdf file.

which isn't the same as working with a .docx.

and see what's really there.  Should be a image_page0.png file.

Check it with file -b image_page0.png

Test isn't same as ﻿working with a .docx or other file type.

Check settings of assignment ... especially the file type students are allowed to submit.   The entire process dependent upon the student upload.  Might go to assignment itself and download the file student submitted.

There is also a task related ... defaults to run ASAP.  Set path to php-cli so you can see the 'run now' link under that task.  Since you are having issues, click the 'run now' to see how that specific task is performing.

Since you shared the fact that hosting provider had to install ghostscript for you kinda indicates you might have an under-powered server.

From ssh, what does the top of the 'top' command look like?

Lot's of other things potentially to look at, so we'll start with above.

I check "image_page0.png" is not exist on below location

Also,  If I run below command using SSH then the image is successfully generated from pdf to png on the above location.

Is there any other possible issue?

Average of ratings: -
Permalink Show parent Reply
when you ran the command via ssh, were you logged on as root, or another use?   whoami
"Check settings of assignment ... especially the file type students are allowed to submit.   The entire process dependent upon the student upload.  Might go to assignment itself and download the file student submitted.

There is also a task related ... defaults to run ASAP.  Set path to php-cli so you can see the 'run now' link under that task.  Since you are having issues, click the 'run now' to see how that specific task is performing.

Since you shared the fact that hosting provider had to install ghostscript for you kinda indicates you might have an under-powered server.

From ssh, what does the top of the 'top' command look like?"

"Check settings of assignment ... especially the file type students are allowed to submit.   The entire process dependent upon the student upload.  Might go to assignment itself and download the file student submitted.

Since you shared the fact that hosting provider had to install ghostscript for you kinda indicates you might have an under-powered server.
Answer
[root@ssh-lin-us1 local]# which ghostscript
/usr/bin/ghostscript
There is also a task related ... defaults to run ASAP.  Set path to php-cli so you can see the 'run now' link under that task.  Since you are having issues, click the 'run now' to see how that specific task is performing.
- I do not understand about it. can you explain me in detail?
Average of ratings: -
Permalink Show parent Reply
Go to your servers:
/admin/tool/task/scheduledtasks.php
IF you have set the path for php-cli there will be a 'run now' link under the task for the very first task listed which is:
Prepare submissions for annotation \assignfeedback_editpdf\task\convert_submissions

I am not understanding second part of your quesiton. Can you explain in more details?
Average of ratings: -
Permalink Show parent Reply

Each submission failed to convert.

Can you check your Litespeed's web service error logs?

Don't think there are many in these forums that use Litespeed, thus perhaps one of your resources for trouble shooting issues is:

May as well ask ... what operating system?  Linux?  Ubuntu/CentOS other?

Not being nosey ... if you look at recommendations for forums and what information to share up front about server, those seamingly unrelated really might be related.

Average of ratings: -
Permalink Show parent Reply
We are using CentOs with cloud linux.
I checked error log but it's show no any error

There could be other error logs which don't combine with litespeed's logs.

So what other protections does your server have?

One of the things that causes issues with CentOS 7 sometimes is a thing called 'seLinux' ... security enhanced ... it might not log errors to Litespeed logs but to logs of it's own.

Typically, if one had root access to server (which you shared with me in a PM you do not, and you are acting as a go-between to those who do), a command exist to see if seLinux is set to enforcing.

Basically, when moodle attempts to generate a png image of whatever is being converted, it relies upon ghostscript (gs) to do that ... the path you enter might show a 'check' ... meaning it found gs at path given, but that won't tell you if Moodle can actually run it ... in your servers case, Moodle code can't - we've proven that.

Why do I get the feeling am trying to teach your hosting providers tech support via proxy (ie, you)?

Maybe, hosting providers tech support should join the forums - if they are gonna tell customers, ie, you, their servers can run moodles, then it suggest they have some knowledge of moodle.

I am having the exact same problem, but only on one server. SELinux is set to permissive, so I do not think it is that, But cPanel users (the moodle site) cannot run the GS command, but I can from shell. This server is running PHP 7.2.29.

Happy to provide any info I can to help solve this. I am stumped.

SELinux complaints in logs do give a clue.

cPanel user ... don't know what that means.   Ownerships/permissons on files in code are like what?

If you can run from shell, how are you logged on?  Did you su to root to run it?  Did you sudo to user of code scripts and run the same command?

Could turn off annotation in Feedback settings (course level and site level).  Doing that no doc/file submitted should be converted to a PDF but teacher than has only comments in moodle and to actually view a file has to download to open.

Also, higher versions of Moodle have new settings for Assignments that are not automagically set after an upgrade.   Each Assignment has to be visited and mimetypes/filetypes allowed settings need to be set ... might see nothing in the box for that setting now and I don't know if Moodle smart enough to defaiult to * ... all.   Probably best to set to something otherwise teacher might not have software to open the file ... thus can't grade.

Document conversion via unoconv has been problematic ... have you thought about using Google?

By cPanel user, I mean the account user. So the various moodle sites on this server are all a different cPanel user account.

The allowed filetypes setting is correct.

How many moodle sites?  Thus can't give definitive answer.

All of those sites use the same ghostscript although the process saves files
in different moodledata directories.  What's top look like?

One assignment can jam up the process.
There is a task for prepping the assignments files uploaded to PDF for when
teacher decides to grade.

/admin/tool/task/scheduledtasks.php
first one listed:
Prepare submissions for annotation \assignfeedback_editpdf\task\convert_submissions
is defaulted to run */15

The test just does a test ... and from pdf to png.

In the assignment you've limited student uploads to one of three (accepted file types:
.docx,.doc,.pdf

IF you want to test ghostscript for those file types, you'll have to find
the command for each document type.

For that, one can use:
https://www.ghostscript.com/doc/current/Use.htm

I personally find the annotation tool clunky and not easy to use.  Your teachers might think the same.

Thus, might be best to turn it off and the only feedback teachers can give
are in comments.  Means teacher would have to download whatever file to view locally.

same problem as your did you find any solution??

Average of ratings: -
Permalink Show parent Reply
Hi manoj gusain,
Yes mine was solved, the problem I had was ghostscript, I had left on the default path in moodle but when I checked with the host, the path being used on the server was completely different. I had to update the path in moodle so that it is the same as on the server, I would advise you ask your host if you are not hosting yourself for the paths to the script on the server. Just a note, when I enquired I was initially told by the host that managing of scripts is not part of our agreement, I had to tell the person who was assisting me that I didn't want him to configure the scripts but rather to provide me with the paths to the scripts.(I use hostgator by the way)
Average of ratings: -
Permalink Show parent Reply
thankyou cosmos for reply i appreciate i am using inmotion hosting also i ask them they told me the path /usr/bin/ghostscript also i check which ghostscript also give same path which i put in system path and it show me tick sign means its correct but when i test ghostscript it give me error

﻿Paths seen in config hints are not discovered ... they are suggestions.
To know for sure, the command which ghostscript command should show that path for user's environment.  Let's say servers web service user is 'apache', try this command to see about path/environment:

sudo -u apache which ghostscript

On a CentOS 7 box, that shows:

and if one ls -l /bin/ghostscript

Is that an alias?   IF so you will see a -> /usr/bin/ghostscript
IF not an alias, it means changes to config of moodle paths did not take for some reason.

Can force the path you want by adding a $CFG line to config.php

Does your site run any web application firewall?  Securi, mod_security, or if CentOS is selinux set to enforcing and preventing writing of file to moodledata?

which ghostscript give me path  /usr/bin/ghostscript

above is the output

the main problem is ghostscript once the path is correct then it work but i cant understand what is the problem??

please anyone can help its urgent what should i do? changing hosting provider can help??

exactly i have same issue whatever you have can you help me please still having this problem did you solved it??