Opinion article: BYOD: Be safe with a notebook, leave the tablet at home

Summary: Many folks are bringing their own device to work, and a common question asked is notebook or tablet? Since we're talking work, better leave the tablet at home.

I'm sure there's more behind this advice but the author doesn't give any concrete examples of what he means. Can anyone think of what he's getting at?

Matt - Typically I use my tablet for watching movies, playing games, looking at Facebook, etc. I find that I use it mostly for entertainment. I typically think of using my laptop when I have work I want to get done. I would guess that may be what is behind the statement. Perhaps it is just a cautionary tale of blurring the lines between one's personal life and one's work life. Peace - Anthony

Where is this article?

Here: BYOD: Be safe with a notebook, leave the tablet at home

Not like Matt, is it, to forget to give us link?

I've seen a lot of buying decisions of schools and organisations going for tablet devices, particularly iPads, for classroom use. I can see that they have a lot of advantages, particularly for very young learners, and touch screens are incredibly convenient.

But, doesn't anyone see problems with using tablets for education? Especially if the tablet in question prevents uploads through the browser - How are learners supposed to submit anything other than text?

I recently ran a learner centred blog project for teenagers on an international summer school in London, UK. Almost all of them had iPhones but were horribly disappointed that they couldn't upload the photos, audio and video that they recorded into their blog posts. I even tried installing iTunes on my laptop to try to transfer the files that way but iDevices don't allow you to do that either. Only the learners with Blackberry, Android devices and digital cameras could fully participate in creating non-text content. I ended up having to use some of my equipment to fill in some of the content creation gaps, e.g. for learner recorded radio programmes and photos. And a lot of photos ended up coming from Creative Commons sources; Luckily there's a lot of photos of London under CC licences.

iPads are also not practically serviceable, you can't expand them, you can only sync them to one computer, you can't replace the battery when it no longer holds a charge (Lithium-ion polymer batteries have quite a short lifespan and constant charging reduces this even further), and they're not recycleable (the components and case are all glued together and next to impossible to separate).

It looks like Macbooks are going this way too: http://ifixit.org/2753/macbook-pro-with-retina-display-teardown/

What issues have you come across with using tablets to work and study?

(quote) iPads are also not practically serviceable, you can't expand them, you can only sync them to one computer, you can't replace the battery when it no longer holds a charge (Lithium-ion polymer batteries have quite a short lifespan and constant charging reduces this even further), and they're not recycleable (the components and case are all glued together and next to impossible to separate).

Thanks for the link to the MBP teardown, which also made me glad I don't own any iThings.

So, truly, you can't go the Genius Bar and get your iPad battery replaced? Oh, wow, here's the answer. http://www.engadget.com/2010/03/13/dead-ipad-battery-never-mind-replacing-it-apple-just-sends-ano/

Interesting subject this. And even more interesting is that I've actually embarked on a "Have Tablet will travel" practice.

Last Friday I went for a Degree level programme moderation meeting. For the first time I made a decision to leave my trusty (and heavy) Year 2001 HP Laptop at home. I brought my 7-inch Android tablet with a slew of gadgets and devices that allowed me to surf the Net, type notes, access Ms Excel and finish the moderation work. Here's a pic of the equipment that I brought. 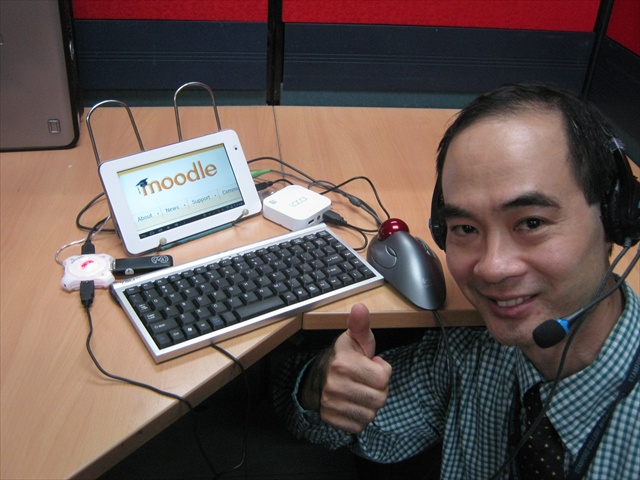 Thumbs-up mate. That square white block that looks like a hockey puck is my backup power/battery pack in case my tablet runs out of juice after 2.5 hours  (oh dear) of continuous use. Where's an iPad when you need one? Actually the one equipment that I'm proudest of is that 1970s metal book stand. The don't make them anymore these days.

Full "report" on my blog here. Cheers to all you Moodlers out there!

In the meantime, remember this: Stay hungry and stay ... in Penang Malaysia for the BEST FOOD!

That's an interesting set up you've got there.

I've been considering how I'd go mobile if it became necessary or more convenient.

If money was no object, I'd go the smartbook route: Intel i3 or i5 CPU, dedicated graphics, 11" or larger screen, SDD for fast startup and, if possible, some version of Linux like Mint or Ubuntu so it's extra fast. That would knock the socks off of even entry level laptops. Since there's no moving parts, they're generally very thin and lightweight.

At the cheaper end of the market, I'd go for a netbook: In this department, AMD seem to outperform Intel Atom chips. They're a lot "beefier" to use the technical term ;) than ARM chips although they do use more power. Still, these days, you're never far from a power outlet, and PSUs for netbooks are tiny. Again some version of Linux would make them faster and the better ones have SSDs in them too.

In both cases, almost everything's easily serviceable and replaceable. They're also easily upgradeable (often you can do it yourself). The exception to this in the smartbook category being Macbook Air. You also get plenty of default connectivity with projectors, USB devices, SD cards, ethernet, WiFi, and in some cases Bluetooth.

They're also more secure and have a longer track record against malware and spyware with plenty of 3rd party security and anti virus software available. Oh, then there's the sheer quantity of well developed open source software projects that allow you to do just about anything you could possibly want for free (Of course, we should all donate what we can to the developers and projects whose software we use).

Thanks for your insight on the subject. I've always looked at the amount of money spent vs specifications, and comparing a notebook/netbook vs a tablet, I get so much more with a notebook/netbook in terms of harddrive space (usually 300Gig vs a paltry 16Gb on a tablet) and CD-ROM/DVD drive capability (for notebook, not netbook). So I always told myself I'd buy a netbook instead of a tablet. When this 'affordable" little tablet came along my way, I grabbed it and also the opportunity to learn about tablets and Android. So for the money spent it's been a good education for me. So that I can make a more informed decision whether to go for a RM1K++ tablet or to buy a power notebook/netbook.

Thanks to Matt for bringing up and stimulating the discussion. Riveting stuff indeed!

From watching my learners working on iPhones, iPads, Android phones and tablets, and Blackberry devices, I have to say that as ad-hoc devices, Android and Blackberry work pretty well for creating multimedia content (photos, audio and video) and uploading them onto a CMS/LMS. It still involves them going into an ICT lab and using PCs with full sized screens and real keyboards, so it's not exactly BYOD. However, some tried using tablets alone to update or write posts (I can check the IP addresses and server stats for that data) but they were short and I could see that they'd spent less time on them than those they'd authored on PCs.

Just lovely to see you Frankie,
Your fan,

I do almost everything with my iPad now except when I need specialist software, make complicated office docs or the few things on Moodle that I cannot do on an iPad.  Advantage for me is the weight and size - anything larger I cannot easily carry around and the battery will last a whole day of working.  Anything smaller - I can't see that well.